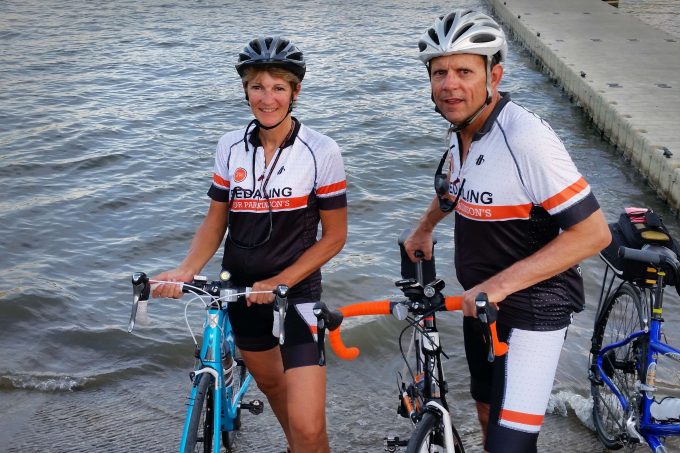 Doug Kirk and his wife Sheila will spend the last week of July riding more than 450 miles along the scenic southern hills of Iowa for the Register’s Annual Great Bicycle Ride Across Iowa, or RAGBRAI. It’s the oldest and largest bicycle touring event in the world. Event organizers emphasize that it’s not a race — it’s a ride.

Doug’s own personal health journey has been quite the ride. At only 38 years old, he remembers experiencing early, tell-tale symptoms of a neurological disorder.

Things like brushing his teeth or raising his left arm became difficult. He wasn’t able to sleep. Even sitting for extended periods of time proved painful. As a computer programmer, his symptoms were slowly affecting his work.

Doug was diagnosed with Parkinson’s at age 40.

After his initial diagnosis in 2001, he spent his time searching for ways to manage his condition and ease his symptoms. He began taking medication to manage his most severe symptom, constant stiffness on the left side of his body. Two years and a new medication later, he began experiencing worsening side effects, including dyskinesia — unpredictable, involuntary movements.

In 2010, Doug went on long-term disability and learned a new way of living with his symptoms and their inherent unpredictability.

Two years later, he and his wife relocated to Cape Coral, Florida, to care for his mother-in-law. His neurologist, Amanda Avila, M.D. (COM ’12), suggested Doug might be a candidate for deep brain stimulation surgery, a procedure where brain stimulators are implanted to regulate abnormal patterns of brain activity.

But after years of medication and countless hours of his own research, his journey led him to the UF Health Center for Movement Disorders and Neurorestoration, where he underwent three separate surgeries for deep brain stimulation in late 2013 to alleviate his Parkinson’s symptoms.

“Before the surgery, my ‘off time’ of medication was unpredictable,” he said. Doug couldn’t anticipate when the medicine would fade, sometimes leading to loss of control in his limbs.

Doug’s surgical procedures were completed over a three-month span, each a month apart. Two surgeries were to precisely place the implant. The third was for the implantable pulse generator, which regulates the implants. Doug also agreed to be part of a groundbreaking clinical trial for a new type of pacemaker battery, which allows him to recharge at home every four to five days.

When he followed up with Dr. Avila in Cape Coral for his first six-month check-up after the final surgery, office staff couldn’t tell he had any symptoms of Parkinson’s.

“The physicians, including Drs. Foote and Okun, it’s amazing what they’re doing. But just as important is the entire staff of that clinic,” he said.

“To have everyone that you need — the people who program the implants, physical and occupational therapists, nutritionists and support staff — and everyone know about Parkinson’s and movement disorders, it’s huge for the patient.”

Three years ago, Doug wasn’t able to ride on two wheels, relegated to a three-wheel recumbent tricycle so he could keep riding and keep his balance.

Doug and his wife celebrated their 30th anniversary last year. They celebrated by gifting each other new two-wheel bicycles in preparation for last year’s ride, with more rides planned in the years to come.

To support the work of our Center for Movement Disorders clinicians and staff who helped Doug regain his mobility, visit bit.ly/UFCMDDoug.