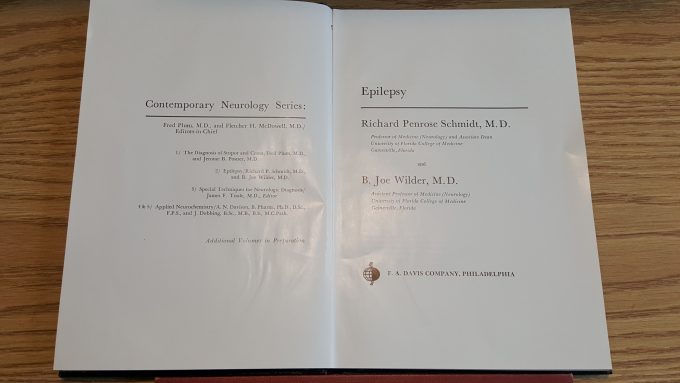 The foundations of epilepsy patient care and scientific epileptology at the University of Florida were laid by BJ Wilder and RP Schmidt over half a century ago. Drs. Wilder and Schmidt performed a number of early neurophysiological studies of epileptogenesis; Dr. Wilder (known to friends and colleagues the world over as ‘BJ’) was also instrumental in several pivotal studies that led to the approval of many second generation anticonvulsant medications. Few trainees in the current generation know, for instance, that BJ and his team pioneered the practice of serum anticonvulsant level monitoring and established the concept of therapeutic levels, an example of which is the universally known therapeutic phenytoin level of ‘10-20’.

Over the years, hundreds of UF neurology residents have received training in basic epilepsy care and scores of fellows have completed advanced training in clinical neurophysiology and matured to leadership positions across the nation. In 1992, the epilepsy surgery program was launched to complement the medical aspects of the program and offer truly comprehensive care for both children and adults with epilepsy. Today, we are a National Association of Epilepsy Centers Level IV program that provides compassionate, patient-centered and innovative care for epilepsy. Our expanding team of adult and pediatric epilepsy neurologists partners with an adult and a pediatric epilepsy neurosurgeon and several experienced advanced registered nurse practitioners. We are supported by state-of-the-art facilities in the new NeuroMedicine Hospital at UFHealth and by a dedicated team of neuroradiologists, neuropsychologists, neuropathologists and an academic dietary biochemist. We offer advanced pharmacotherapy that include clinical trials of emerging therapies, peripheral (vagus nerve stimulation – VNS) and central (responsive neurostimulation – RNS – and deep brain stimulation – DBS) neuromodulation therapy and a full range of resective, disconnective and ablative (laser interstitial thermocoagulation therapy) epilepsy surgery procedures. Our long-standing expertise in intracranial EEG monitoring has expanded to include a rapidly evolving stereo-electroencephalography (SEEG) program. While most of our patients live in north and central Florida, many travel from across state and the southeastern United States and beyond.

Fifty years on, the Division of Epilepsy is proud to continue the tradition of excellence set by our founders.

Please browse our pages. Feel free to email or call us with questions and clarifications at UFCEP@neurology.ufl.edu, (352) 273-9570. Welcome!